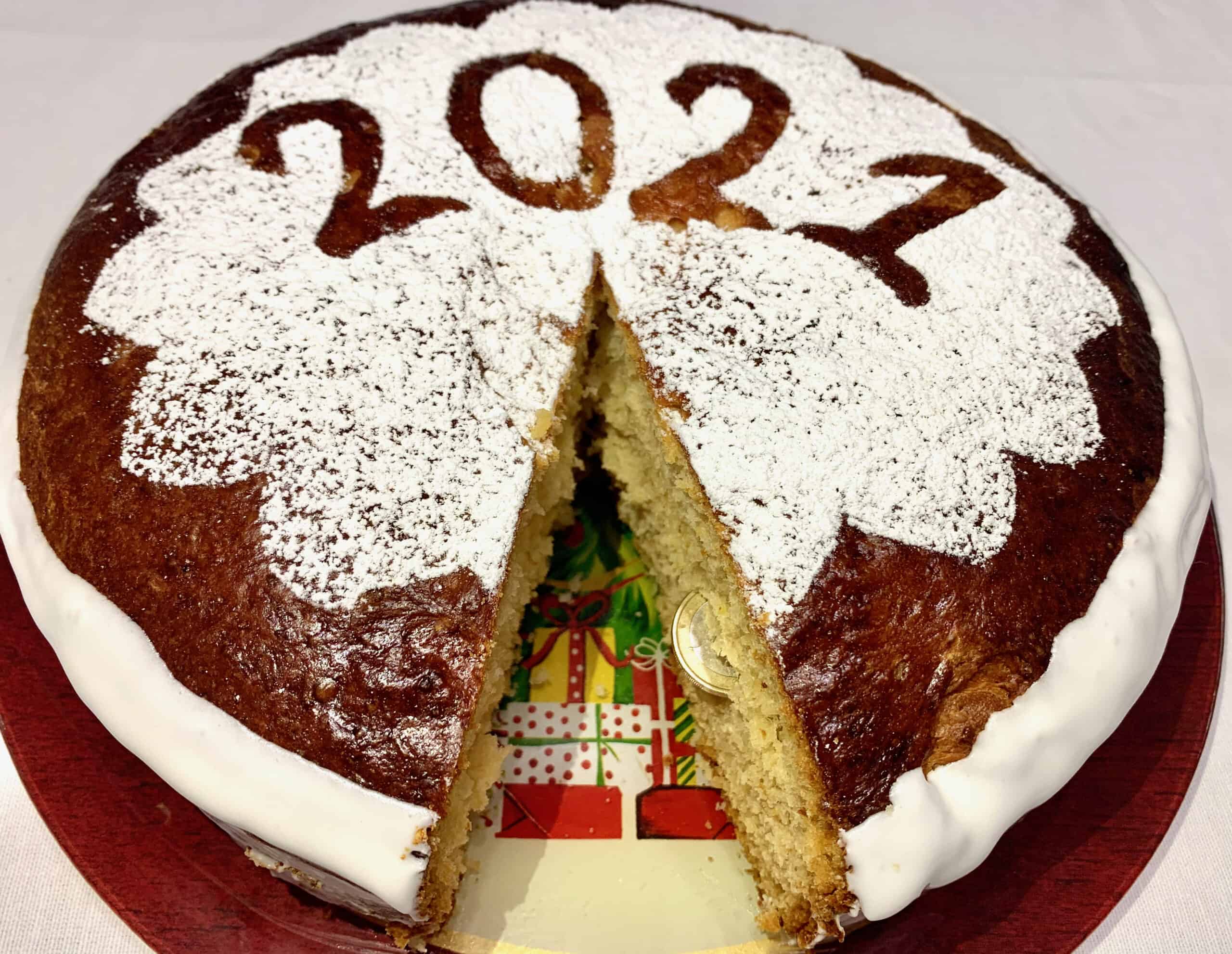 The Greek custom of the Vasilopita and that of the lucky coin originates from Caesarea in Cappadocia. At  330BC St Basil was born in Caesarea. He was a noble and generous man who eventually became a monk.

The story goes that a tyrant had threatened the Caesarea unless its citizens handed all their valuables.  Forced with such aggression, they gathered all their valuable possessions and presented it to their spiritual leader, St Basil. St Basil caring for his city replied to the tyrant that his citizen had nothing of value to surrender which of course infuriated the tyrant.  In a last attempt to save Caesarea,  St Basil presented a chest full of valuables that the citizens had gathered to the tyrant. When the tyrant army opened the chest, a miracle took place; suddenly an army of Angels emerged which defeated the tyrant’s army.

Having defeated the tyrant and kept the valuables, St Basil had to find a way to return the valuables to the citizens.  After much deliberation,  St Basil decided to give out a ‘special’ type bread to the citizens of Caesarea! This ‘special ‘ type of bread included a hidden coin inside. This was Vasilopita.

St Basil’s memory is celebrated on 1st January of annually with a Vasilopita. The hidden (lucky) coins brings prosperity , health and success to anyone who has it in their slice.

Is Vasilopita the same as tsoureki?

Vasilopita is a special type of cake with a ‘lucky’ coin inside. This special cake is made particularly for New Year’s Day. In many households throughout Greece, housewives prepare tsoureki in a circular loaf rather than the Easter one braided. This type of tsoureki is Vasilopita Tsoureki as it includes a lucky coin.

What is Vasilopita tsoureki?

Tsoureki is a spiced sweet brioche type of bread, very similar to challah bread. Both tsoureki and challah bread are brioche like breads made up of egg-yeast-oil dough rather than butter. They are fluffy breads with lots of fibres (stringy) when pulled apart.

Vasilipota tsoureki is infused with orange zest (peel), magleb and vanilla.  Mahleb is a unique spice that is solely used in tsoureki recipes. It smells and tastes like almonds, ie marzipan.

This tsoureki recipe is a variation of the traditional tsoureki (Easter bread) but it is not braided. It is rather baked as a cake/bread in a baking tin.

How can you keep Vasilopita Tsoureki fresh?

You can keep this Vasilopita Tsoureki fresh by storing it in an airtight container for a few days, that is of course if there would be any left by then! A simpler and easy solution to have fresh tsoureki is to make batches of it and store it in the freezer. Freeze a ‘naked’, ie without icing sugar decoration,  Vasilopita Tsoureki and defrost when you wish to enjoy it! Simply defrost!

Over the years, tsoureki recipes have evolved with the addition of other mouthwatering ingredients such as chocolate. Indulge in a chocolate tsoureki with a wonderful marbled effect upon slicing. Find my recipe under Greek marble tsoureki.

Fancy a syrupy tsoureki? Yes, you heart right! chocolate tsoureki buns soaked in syrup! Absolutely delicious! Try my recipe for  cocoa tsoureki with syrup and you won’t be disappointed.

For a different type of tsoureki, a mouthwatering savoury one, packed with all then greek goodness, then try this spinach and Feta tsoureki.

And of course last but not least , the show stopper; A coin

Make sure you wash and wrap the coin with kitchen foil.