Greek Gemista (Yemista) with rice and mince is one of the most popular and traditional family Greek dishes and certainly my mother’s favourite one. Nutritious yet vibrant and colourful dish to brighten every family table. You will find this Greek Recipe in every taverna!

What is Gemista or Yemista?

The dishes name derives from the verb ‘gemizo’ which means to fill / stuff. Gemista or Yemista are stuffed vegetables with rice and most often mince. It is a rather summery dish when all the lovely seasonal vegetables are in season, such as peppers, zucchinis and aubergines. Thankfully tomatoes are available all year round.

Vitamin A boosts our immune system to fight infection and is good for your vision. Vitamin C or ascorbic acid helps wound healing and maintain healthy skin, bones, cartilage and blood vessels. Potassium is a mineral essential for cellular function and nerve conduction.

Ways to prepare Greek Gemista (Yemista) with rice and mince

The most widely known way of preparing Greek Yemista (Stuffed vegetables) is in the oven but this is by far not the only way you can prepare them!

Yes you read right! In fact my mother-in-law prepared Greek Yemista in a pot. I still remember the day we visited her and she had prepared this flavoursome dish for us. Older generation housewives used to prepare a lot of traditional dishes on the hob. Greek Gemista prepared in the pot still retain their juicy earthy flavour just like the oven baked ones.

Nowadays, with steam cookers in our life, why not try my Greek Gemista recipe in the steam cooker? I assure you, you will not be disappointed. Greek Gemista prepared both in the hob are partly boiled and partly steamed, whereas Greek Gemista in a steam cooker are steamed. Preparation of Greek Gemista (Stuffed Vegetables) is the same no matter how you decide to finish off their cooking.

Which vegetables can I use in this Greek Gemista (Yemista) with rice and mince recipe?

Gemista or Yemista recipe varies between regions. The dish was originally made with any garden vegetables that can be stuffed. Nowadays the most popular Gemista are made of green bell peppers and tomatoes.

Why not create though an equally beautiful but also delicious Greek Gemista recipe with the other colourful peppers? I love using red, orange and yellow ones as not only are they sweeter than the green ones, they also make a beautiful plate! Other vegetables to consider for Yemista include: zucchini (courgettes) and aubergines (eggplants).

In contrast, when choosing tomatoes, choose large ones. Tomatoes have soft walls and will require less cooking time.

You can stuff any vegetable you like! In the summer, when courgettes (zucchinis) and aubergines are in abundance, use these for a summery Gemista dish. 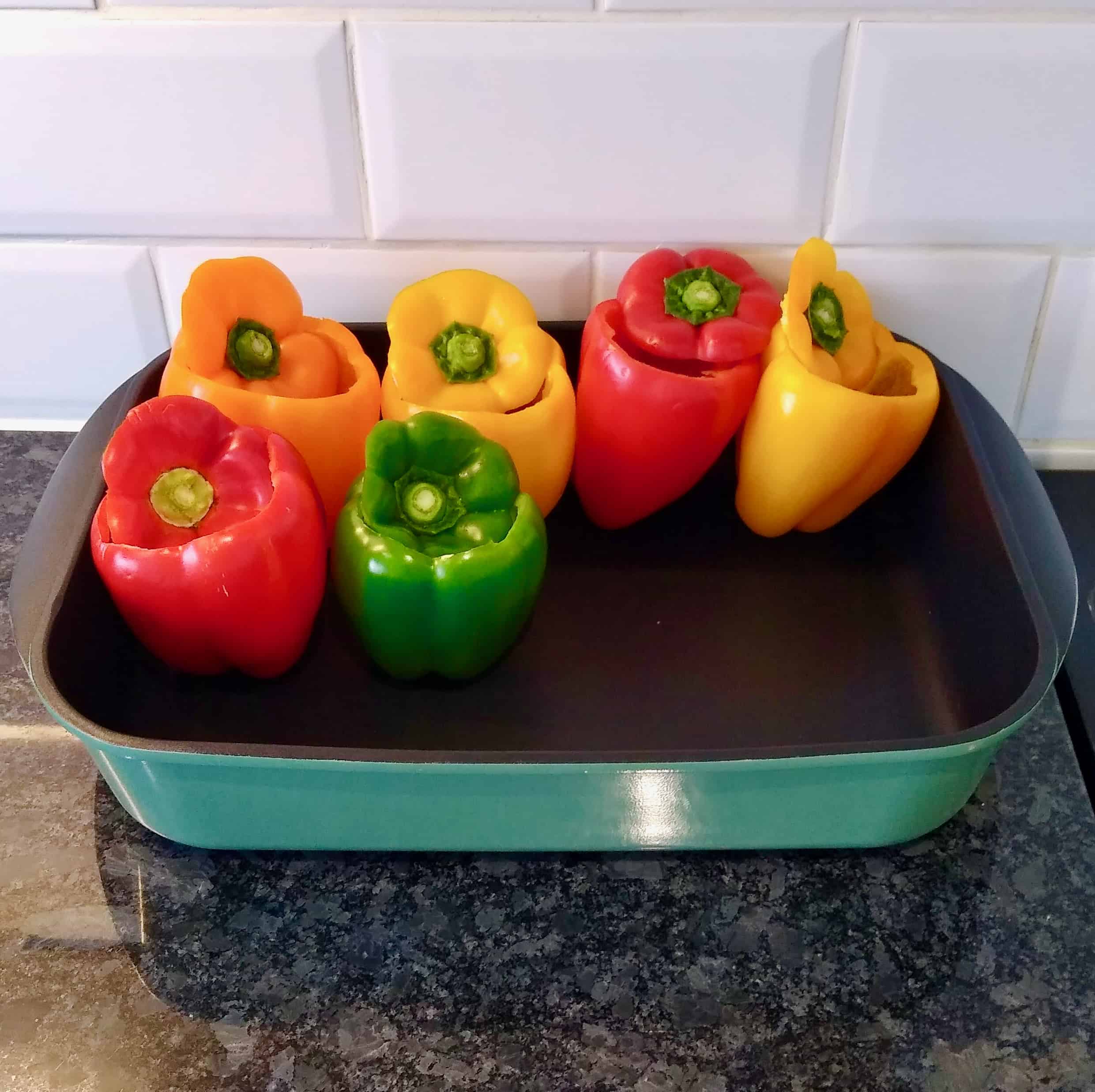 How do I prepare Greek Gemista (Yemista) with rice and mince?

Similarly, if you are using eggplants or zucchinis for Gemista, slice their top off and set it aside. Keep the flesh to use it in the gemista filling.

Slice the onion finely. Pour oil in a frying pan and caramelise the onions. Season with paprika, black pepper and coriander. Continue by adding rice and stir well. Continue by adding ground or mince meat and break into small pieces with the use of a fork. Carry on by adding tomatoes, tomato paste, sugar and salt.

Add water in small increments just like you do when you prepare risotto. Once water is absorbed add some more water. I add parsley, just like my mother, at the end of the cooking preparation so that Gemista filling can have an earthy lovely flavour. Cook the gemista filling until rice is half cooked.

With a spoon fill up the peppers and tomatoes with and lastly cover them with their ‘lids’. From this point onwards it is your choice as to how you will cook Gemista.

Greek Gemista in the hob/or pot

Pour water in a pot and place the stuffed vegetables inside. Pour approximately 350-400ml of hot water, just enough to steam your Greek Gemista (Yemista) with rice and mince. Water in the pot should reach just below halfway of the pepper’s height. Now, place the filled peppers in the bottom of the pot, as they have tougher exteriors, and lay the tomatoes on top. Cover the pot with the lid and let them cook for approximately 25 minutes.

Greek Gemista in a food steamer

In order to prepare Greek Gemista in a steam cooker, follow the recipes steps and prepare the Gemista filing. Spoon the hollow vegetables and place them in the food steamer. Follow the device’s instructions and steam them to perfection!

For medium sized peppers 15-20 minutes in the food steamer is enough. The larger your vegetables are, the more time they require in the steam cooker. Bear in mind that tomatoes need less time as their wall is softer. Steam them for 10-15 minutes.

Steamed and boiled food is healthier as is preserves more nutrients than any other form of cooking. Important nutrients and vitamins are lost in the conventional cooking process. Steaming and boiling also allows vegetables to retain their original flavours. Taste the fresh vegetables in these steamed Greek Gemista. Another great time saving advantage is that of preparation of multiple dishes at the same time. Simply fill up the other compartments of a steamer with vegetables or protein and let it steam away!!

What can I serve Greek Gemista (Yemista) with rice and mince with?

Greek Gemista go very well with a Traditional Greek Feta Salad (Horiatiki), tzatziki (yogurt dip) and sourdough bread. You can also sprinkle a few chunks of Feta cheese on top of them.

To prepare a vegetarian version of Gemista, simply omit the ground meat from the recipe. 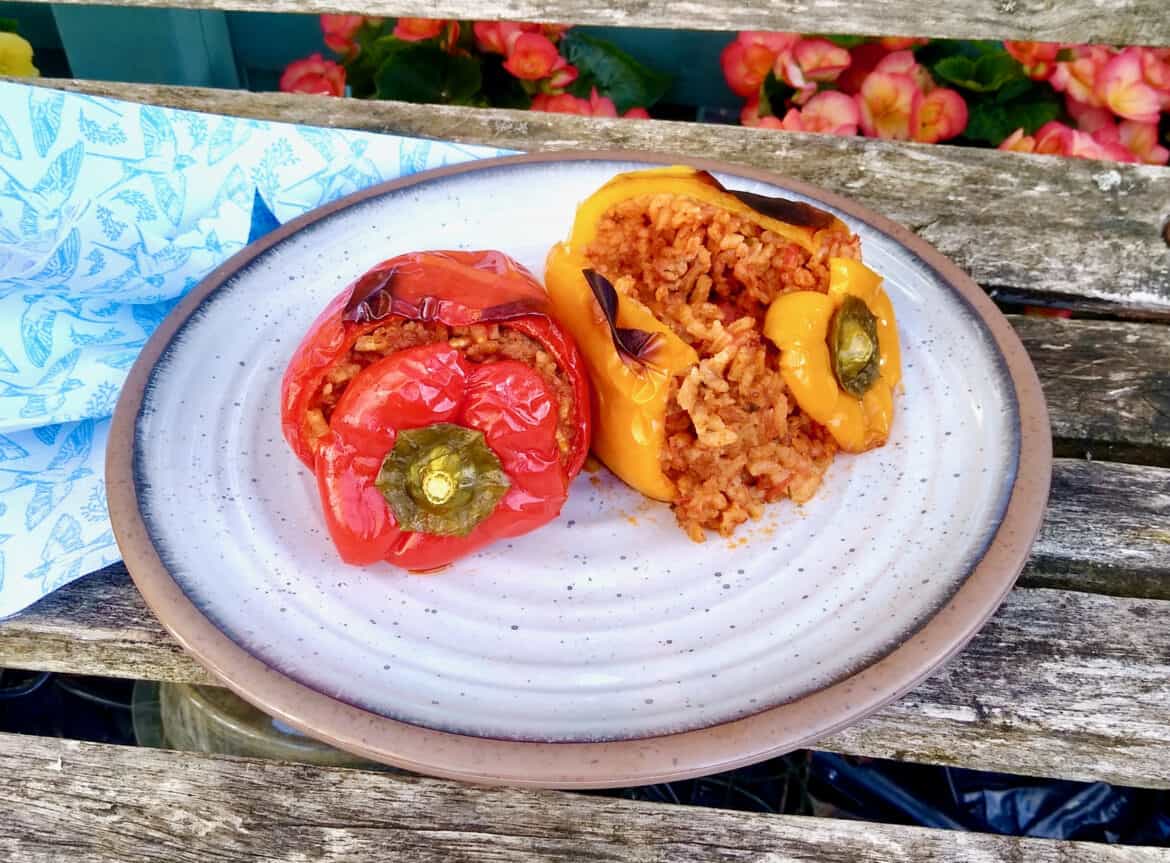 You will need: 1 frying pan, 1 oven dish or steamer or large pot

Gemista in the hob or pot: