Greek Pastitsio recipe (Greek Baked Pasta with Bechamel Sauce) is undoubtedly one of the most famous and traditional Greek recipes. Mince meat sauce in-between layers of pasta topped by rich white creamy Bechamel sauce. Pastitsio is a rather lengthy dish to make, nevertheless, tasting the delicious combination of the creamy white sauce combined with the flavoursome mince meat within layers of baked pasta will make all the effort worth it! 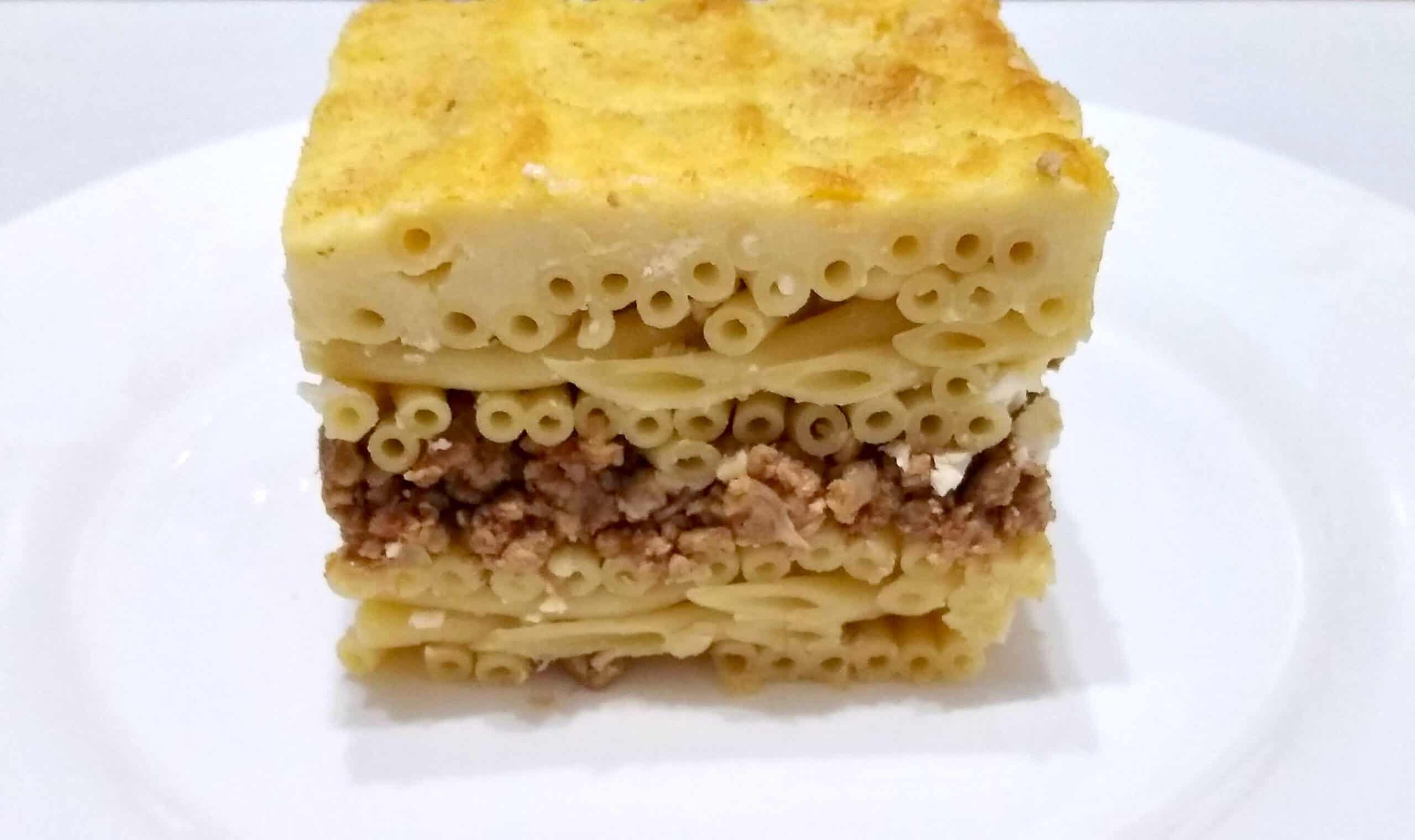 Do not despair, simply follow the steps as indicated in my recipe and you will be rewarded with a delicious earthy pasta baked dish.

What is the difference between a Lasagna recipe and a Greek Pastitsio recipe?

One can say Pastitsio is the Greek version of Lasagna and in fact some people call Pastitsio as Greek Lasagna. Lasagna have layers and layers of flat pasta with mince meat in-between whilst Pastitsio has layer and layer of tubular pasta (once cooked and then baked) with mince meat sauce covered by a rich white creamy sauce.

Moreover, both of the sauces, the mince meat sauce and Bechamel sauce, are quite different to the ones in Lasagna. The thick and rich taste of Bechamel sauce in Greek Pastitsio contrasts the rather thin Lasagne sauce.

What is unique to this Greek Pastitsio (Baked Pasta with Bechamel Sauce)?

Greek Pastitsio is an earthy rustic dish combining pasta, mince meat in a rich red wine and tomato sauce along with a creamy white Bechamel sauce. It is though not just a simple combination of these ingredients. What makes Pastitsio unique and separates it from other pasta bakes and Lasagna is its structure and its layers.  These distinctive layers are as follows:

What are the secrets of Pastitsio?

There are many secrets to preparing this utterly delicious Greek Pastitsio.

Let’s start with the spices: salt, paprika, black pepper, cinnamon, nutmeg, all spice. Every dish is elevated with the correct seasoning. Surely, salt and black pepper are milestones of every traditional Greek dish. The addition here is, paprika, this sweet pepper we simply cannot have enough of in Thrace (Northern Greece).

Cinnamon leaves a spicy after taste and is perfect with beef as it balances the richness of the beef. It should be added early on in the cooking, ideally with the lid on, as it needs time to diffuse its flavour in the dish. Cinnamon also pairs perfectly with red wine.

Nutmeg not only has a warm, nutty flavour but also a distinct aroma. It is great for creamy white sauces like Bechamel as it is paired on Greek Pastitsio.

All spice, another warm and sweet spice pairs perfect with both cinnamon and mince.

Red wine is also another catalyst in this Greek Pastitsio and is added also early on in cooking, prior to adding all other liquids.  Alcohol evaporates during cooking whilst its sweet and acidic flavour enhances the other flavours of the dish. Be mindful, though, not to be overjealous add large quantities of red wine, this will sadly result in the opposite result.

Another little secret is the addition of beaten egg whites in the cooked pasta. Egg whites bind the pasta together and in turn help the pasta be firm and act as a barriers to the Bechamel  and mince meat sauce.

Which pasta can I use and why?

Greek Pastitsio is traditionally made of tubular pasta, a long thick wheat spaghetti with a hole running through its centre.  This type of pasta can be easily found in every Greek deli shop.

One may ask why use this rather thick and hollow pasta and not any other spaghetti?  The tubular pasta is strong enough not to allow mince to sip into the bottom and equally structured enough not to collapse and mix with the mince layer. It is also strong enough and acts as a barrier

Is there a method to cooking pasta for Greek Pastitsio?

Many have asked me if there is a method to cooking pasta for Greek Pastitsio. The first thing I advise is to make sure you have the correct type of spaghetti for the dish. The past used for this dish is a tubular past which is hollow in the middle. Start by boiling hot water and add eh past in the saucepan. The secret to cooking the pasta is cooking it less. I cook the pasta to Al Dente point. Bear in mind that the pasta will be further baked in the oven and thus Al Dente is all that is required.

What is Bechamel sauce and how can I make it?

This delicious Bechamel like sauce is the outermost layer of Greek Pastitsio and covers the pasta layer.

It is an easy sauce to make so let’s start. I personally do not add cheese in my sauce, but you can if you want. I would recommend

Start by assembling and weighing your ingredients for the white sauce.

How can I prepare Pastitsio?

It may feel daunting to prepare Greek Pastitsio but rest assured you will be able to prepare a delicious Pastitsio by following the steps in my recipe.

The dish may be lengthy, but the more times you prepare it, the quicker and easier it will become. One you have made this delicious dish enough times, you will be able to multitask.

I always start my Greek Pastitsio by making the mince meat sauce. Halfway through making this I start boiling the pasta. When the pasta is ready, I add the egg whites and Feta cheese to the pasta and set the pasta aside. When I have finished with the pasta, I move on to preparing the oven dish. I butter the dish and sprinkle crushed French toast (in kitchen blender).  Once I have the oven dish ready, I continue by preparing the Bechamel sauce.

Now, let’s follow the each of the steps in making Greek Pastitsio in more detail.

I always start all my recipes by assembling and weighing all the ingredients in the kitchen counter. I also gather the utensils required so that I do not forget to use them and have them ready within grasp during cooking or baking. 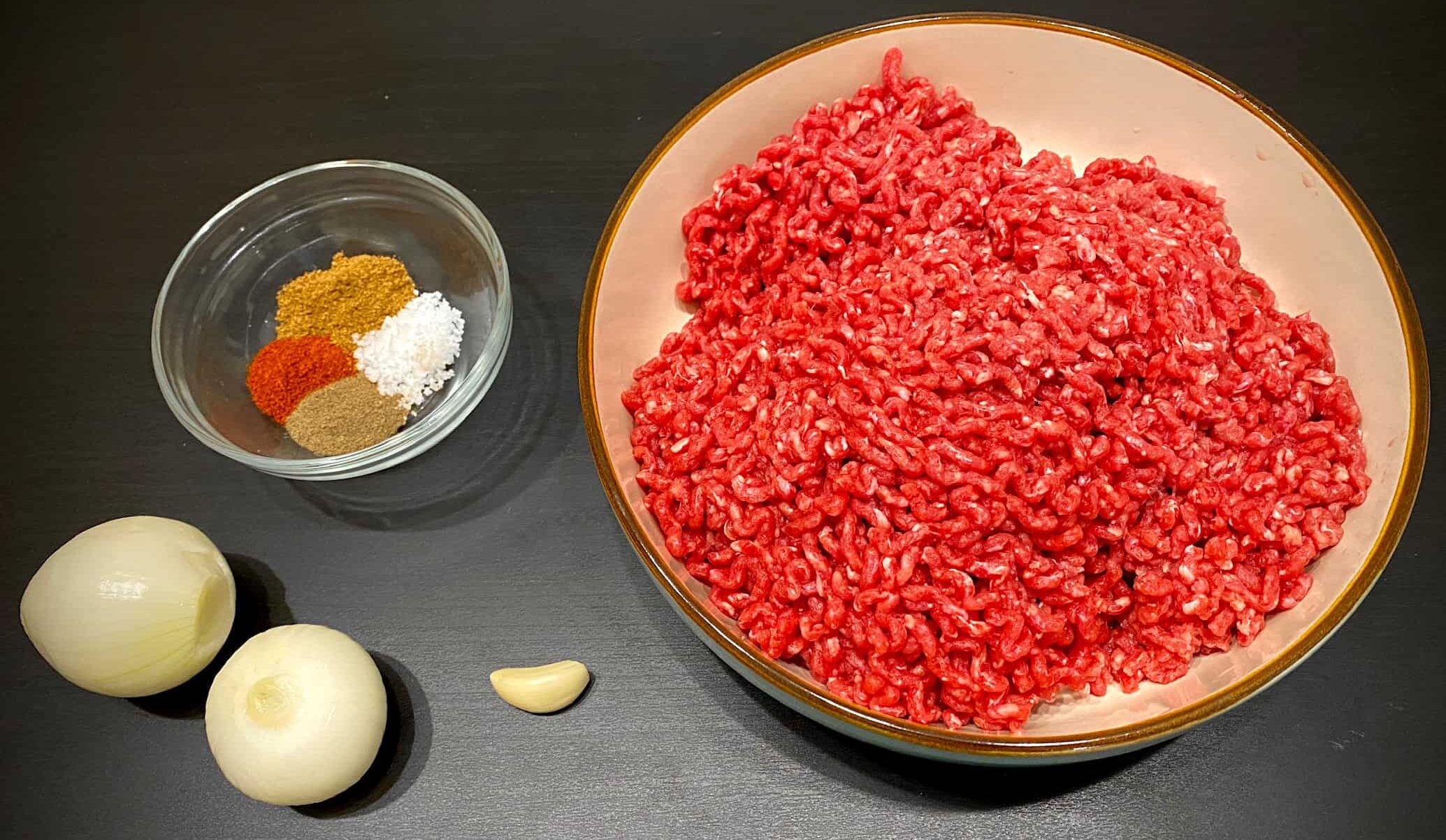 Start by preparing the mince meat sauce which will take approximately 45 minutes.  Over medium heat sauté the finely chopped onions. Season them with onion and stir. Lower the heat and continue by adding garlic and sugar (just a pinch) and stir. Add now tomato paste and continue to stir. Increase now the heat and add the mince in the pan. Break the mince into smaller pieces with a fork. Season the mince with salt, black pepper, all spice and cinnamon. It is now time to add red wine. Carry on by adding the tomatoes and bay leaves. Lower the heat, put the lid on and let it cook for 35 minutes. Do check the mince meat sauce to make sure you are happy with it. 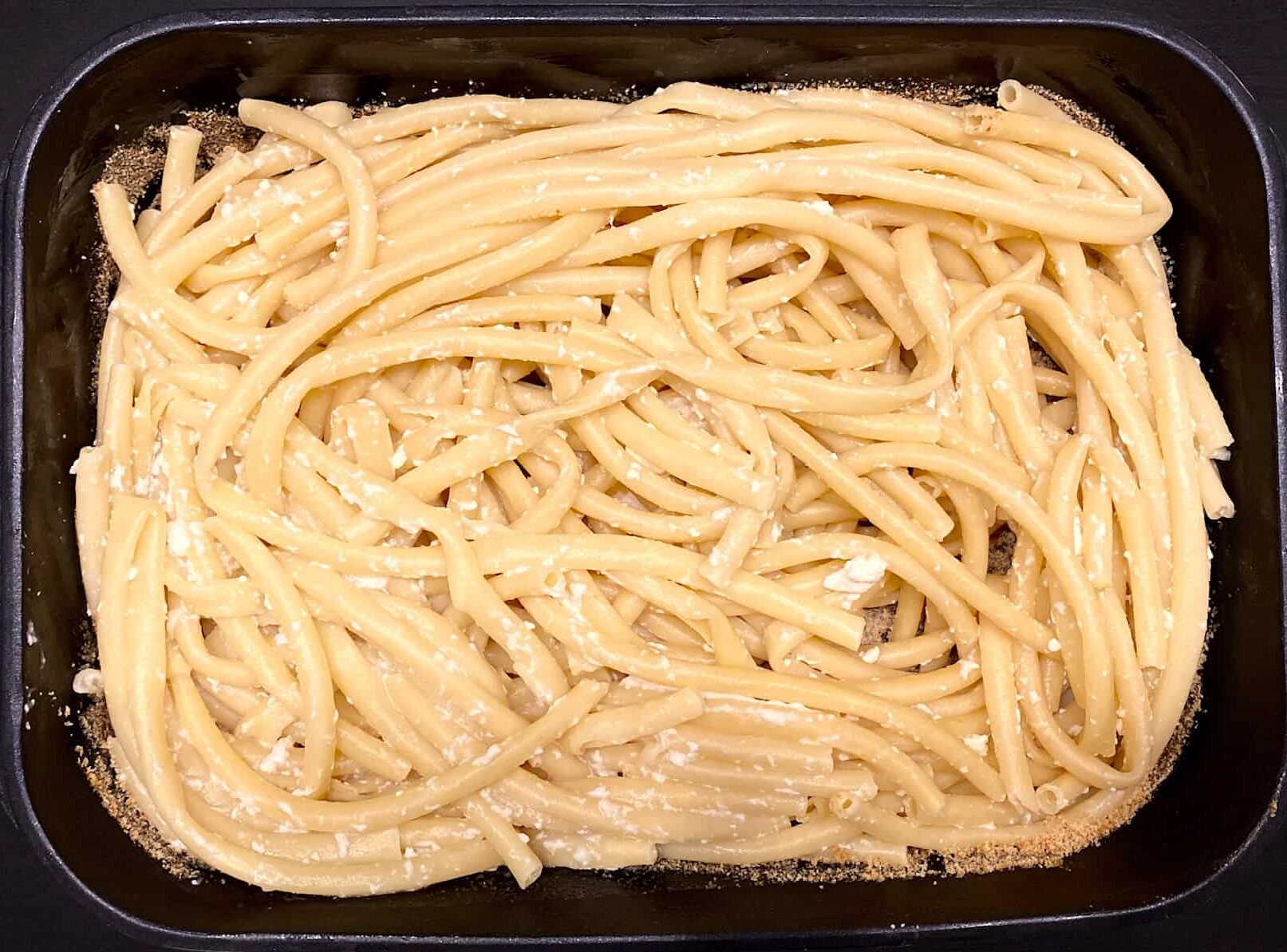 For the Bechamel sauce, in a separate saucepan add butter. Once the butter has melted start adding flour whilst continuously stirring. Stir with a whisk for 2-3 minutes to avoid burning the flour. Continue by adding warm milk in small amounts and whisk. Do so until you have added all the milk. Carry on whisking for a further 1-2 minutes so that the sauce reaches a smooth finish. Add the egg yolks slowly and whisk. Finish with salt, white pepper and nutmeg. At this final stage you can add cheese should you wish to. 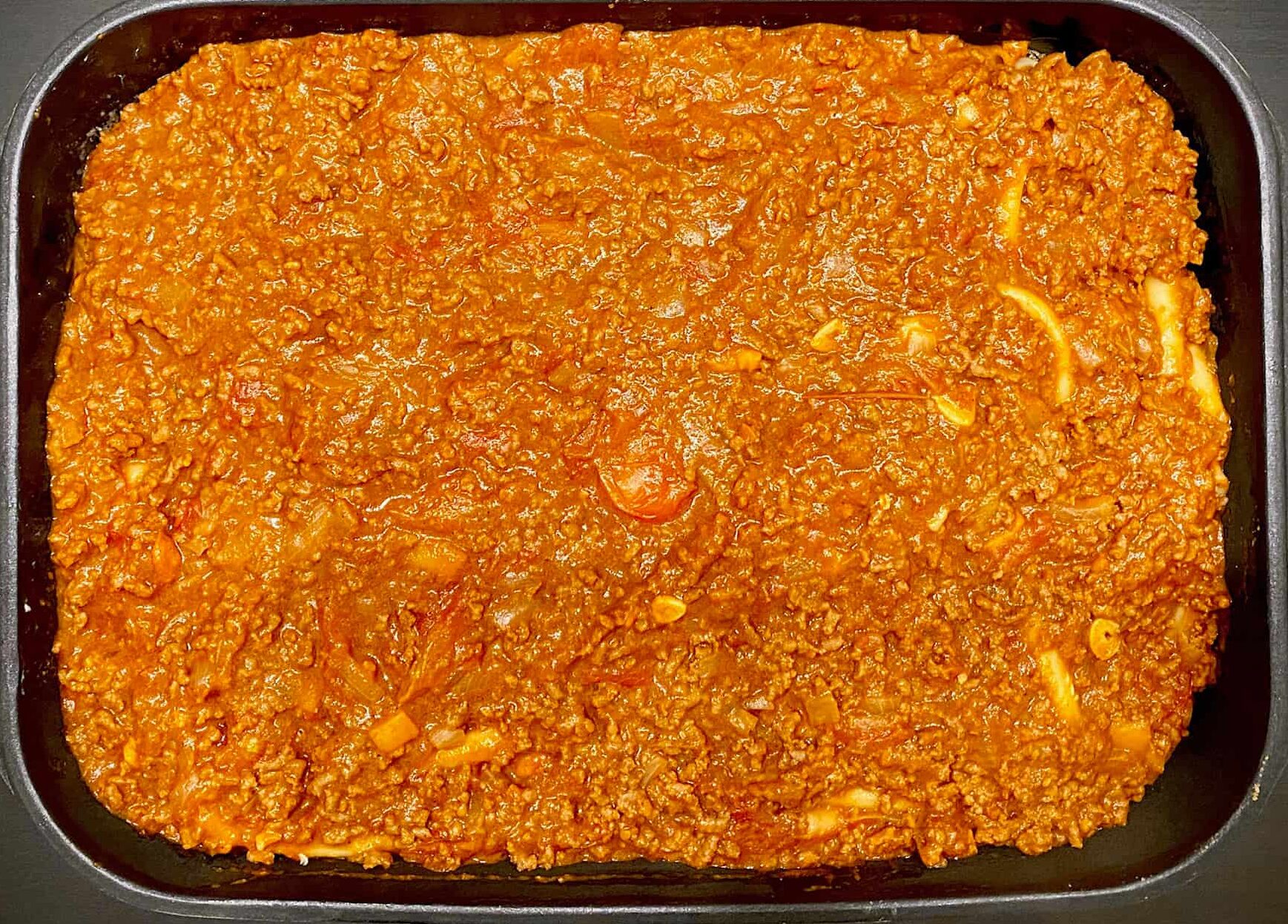 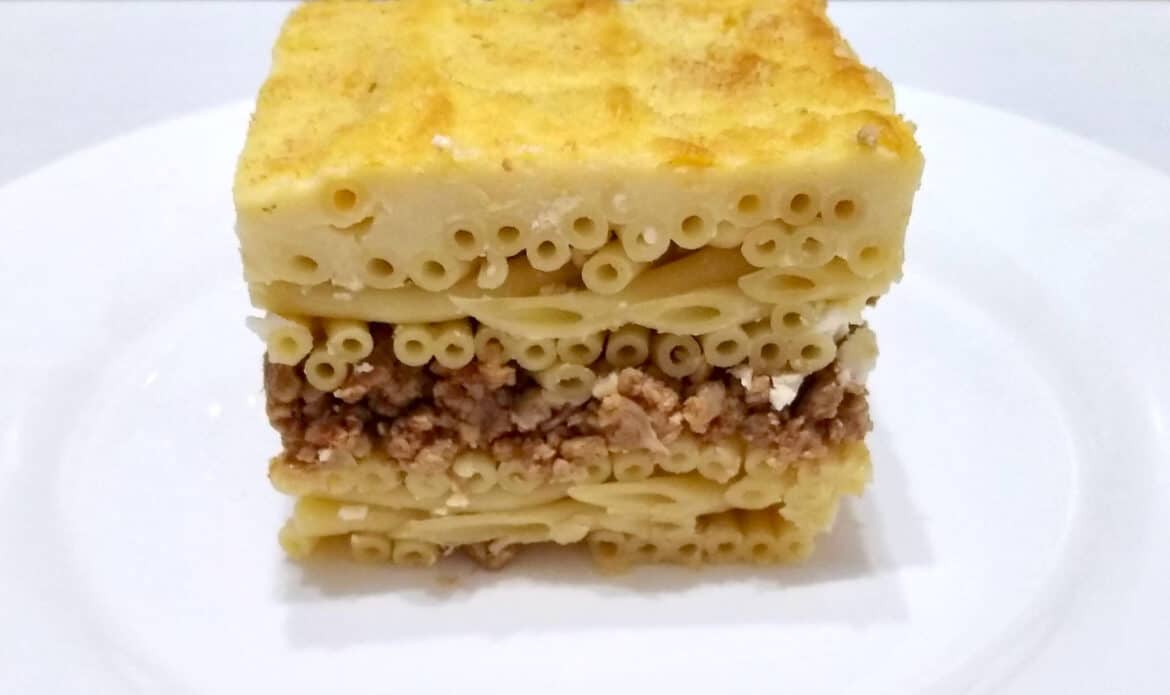 For the mince meat:

For the Bechamel sauce:

For the oven dish:

For this recipe you will need:

For the mince meat:

For the Béchamel sauce: