Chocolate Galaktoboureko is a delicious chocolatey twist to the traditional Greek Galaktoboureko made with creamy semolina chocolate custard sandwiched in between flaky phyllo pastry sheets and soaked in syrup. Its name originates from the combination of two words; ‘Gala’, meaning milk and ‘boureki’ meaning filled pastry. 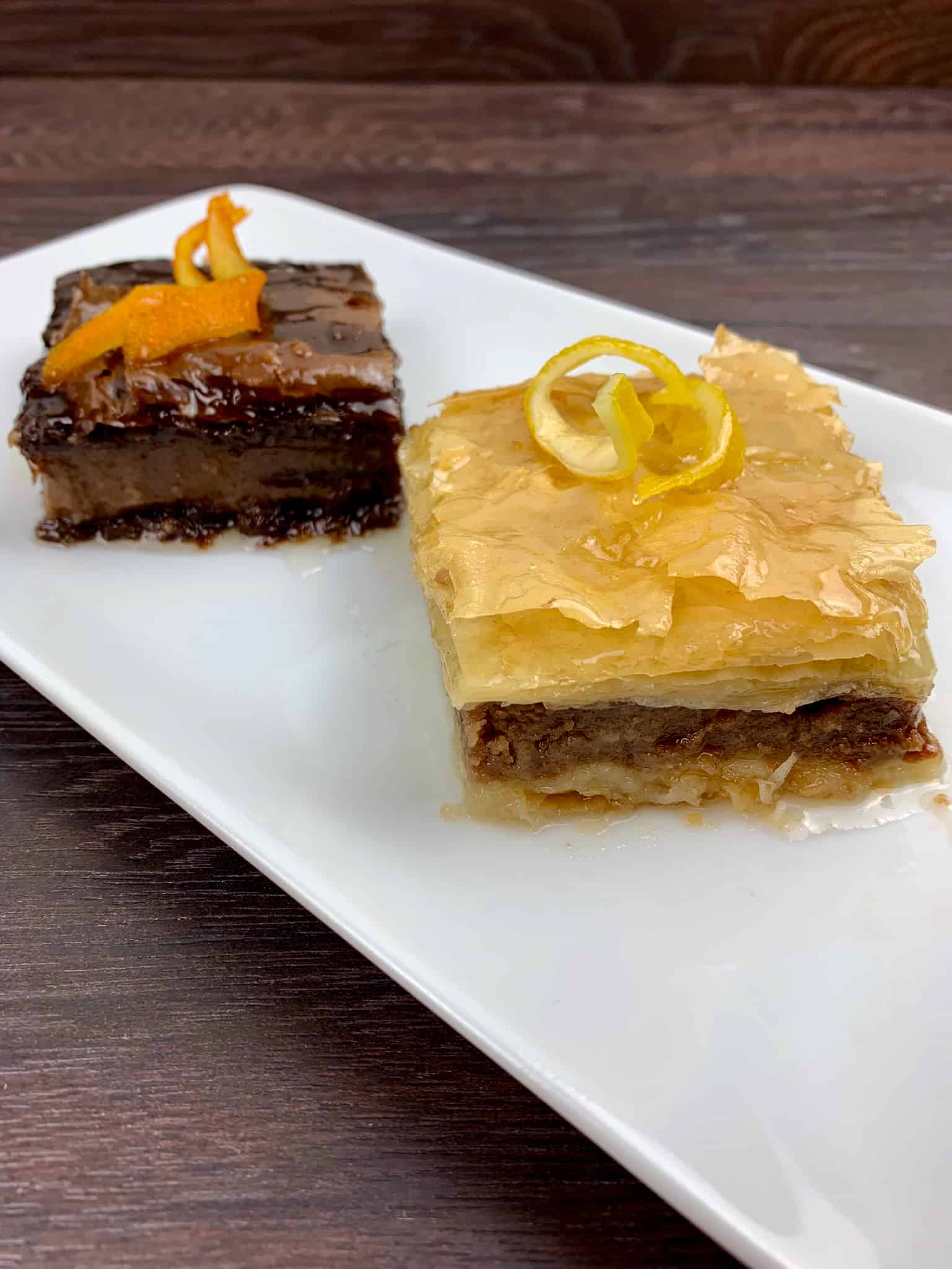 Galaktoboureko closely resembles Bougatsa (another famous Greek dessert), the Portuguese Pasteis de Nata and the French Mille-Fuille. There are though a few differences between these custard and phyllo pastry based desserts.

Bougatsa combines a creamy semolina based custard in-between phyllo sheets which are then baked. Bougatsa is not soaked in syrup but rather served hot from the oven sprinkled with powdered sugar or cinnamon.

The Portuguese Pasteis de Nata combines a creamy caramelised egg custard nested in puff pastry. Finally, the French Mille-Fuille has layers of puff pastry in between pastry cream covered in chocolate and other designs. Mille Fuille pastry cream is also an egg based flour custard rather than a semolina one like in Galaktoboureko.

Just like my favourite Gianniotiko, prepare the aromatic syrup at the beginning and let it cool down. The syrup needs to be of room temperature when added to hot chocolate galaktoboureko as otherwise it will not be absorbed. Never pour hot syrup over hot Galaktoboureko. The phyllo pastry sheets will turn soggy leading to  a disaster.

Pour water and lemon juice on a pan and add sugar with lemon peel. Bring the mixture to boil over high heat. Let it boil for 5-7 minutes until it  thickens.

Galaktoboureko is famous for its creamy semolina custard. Galaktoboureko custard is made from fine semolina, eggs, milk, and sugar. Semolina is made from crushed durum wheat and hence it has a golden colour. It has a sandy texture and can be found in fine and coarse forms. It is healthier than white flour and tastes sweet.

Preparing the galaktoboureko semolina custard is not tricky as long as you follow some simple rules. Start by pouring milk in a saucepan and add half the sugar. Bring this to a boil over high heat. Once it has boiled, lower the heat to medium. Carry on by adding the fine semolina slowly and whisking at the same time continuously. You need to constantly whisk whilst adding the semolina as the custard will turn lumpy otherwise.Let the semolina-milk-sugar mixture cool down before you proceed. Remove it from the hob and let it cool down.

Meanwhile, in a separate bowl beat the eggs with the rest of the sugar and vanilla extract until white and fluffy. When the semolina-milk-sugar mixture has cooled down enough, incorporate the beaten eggs with a spatula.

Place the saucepan again in the hob and cook for a further 1-2 minutes while whisking continuously. Withdraw the saucepan once more from the hob/stove and add cacao, chocolate chips and the melted butter. Stir to combine evenly. There is no need to melt the chocolate chips as they will melt instantly once in the hot semolina-custard.

So let the semolina custard cool down a bit. I usually place it in the fridge for 30 minutes or so as not only does it cool down the custard but it also allows me to better score my chocolate Galaktoboureko.

Phyllo sheets are very thin and dry out quickly. Thus, make sure you have a damp kitchen towel ready to cover the phyllo pastry sheets. 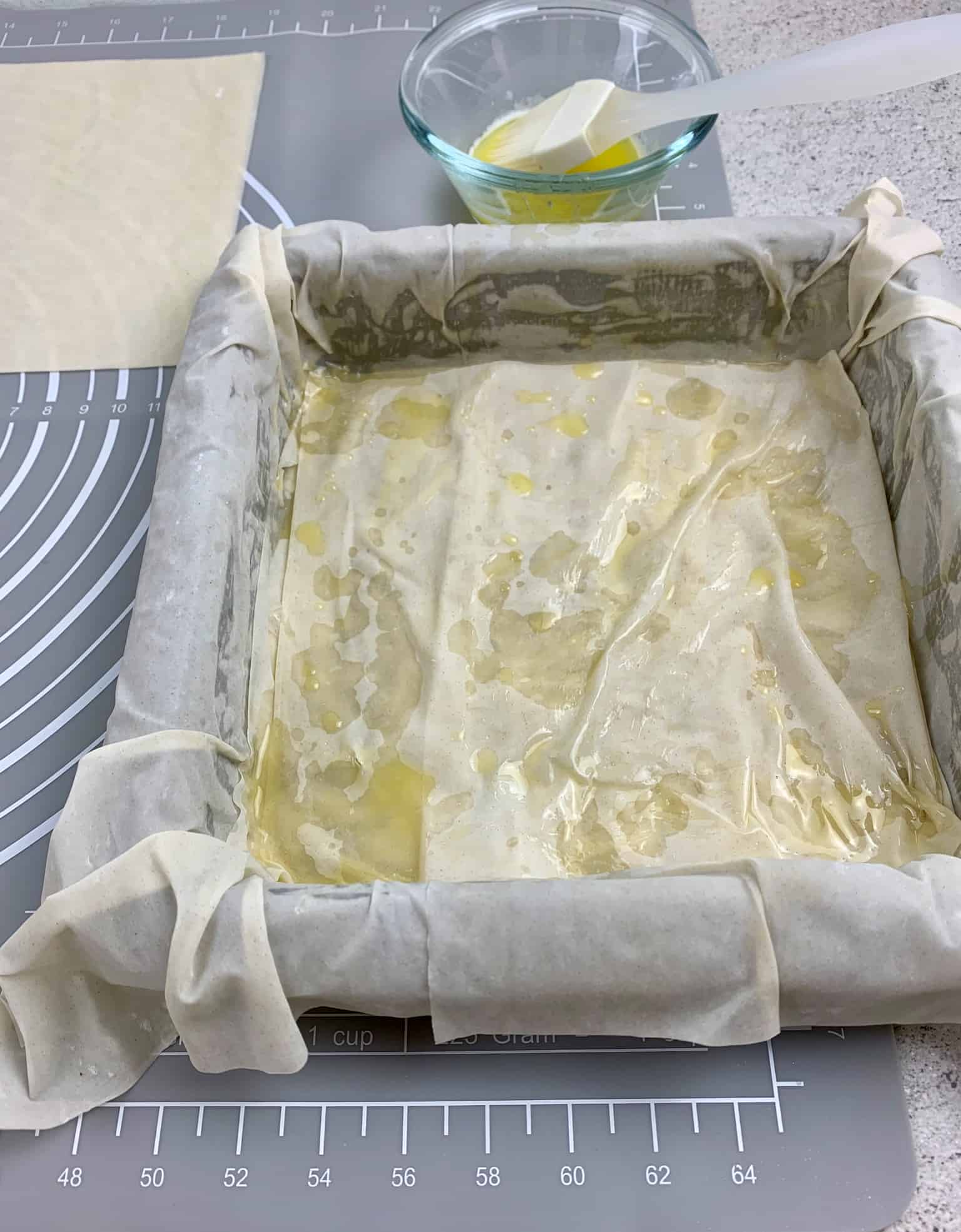 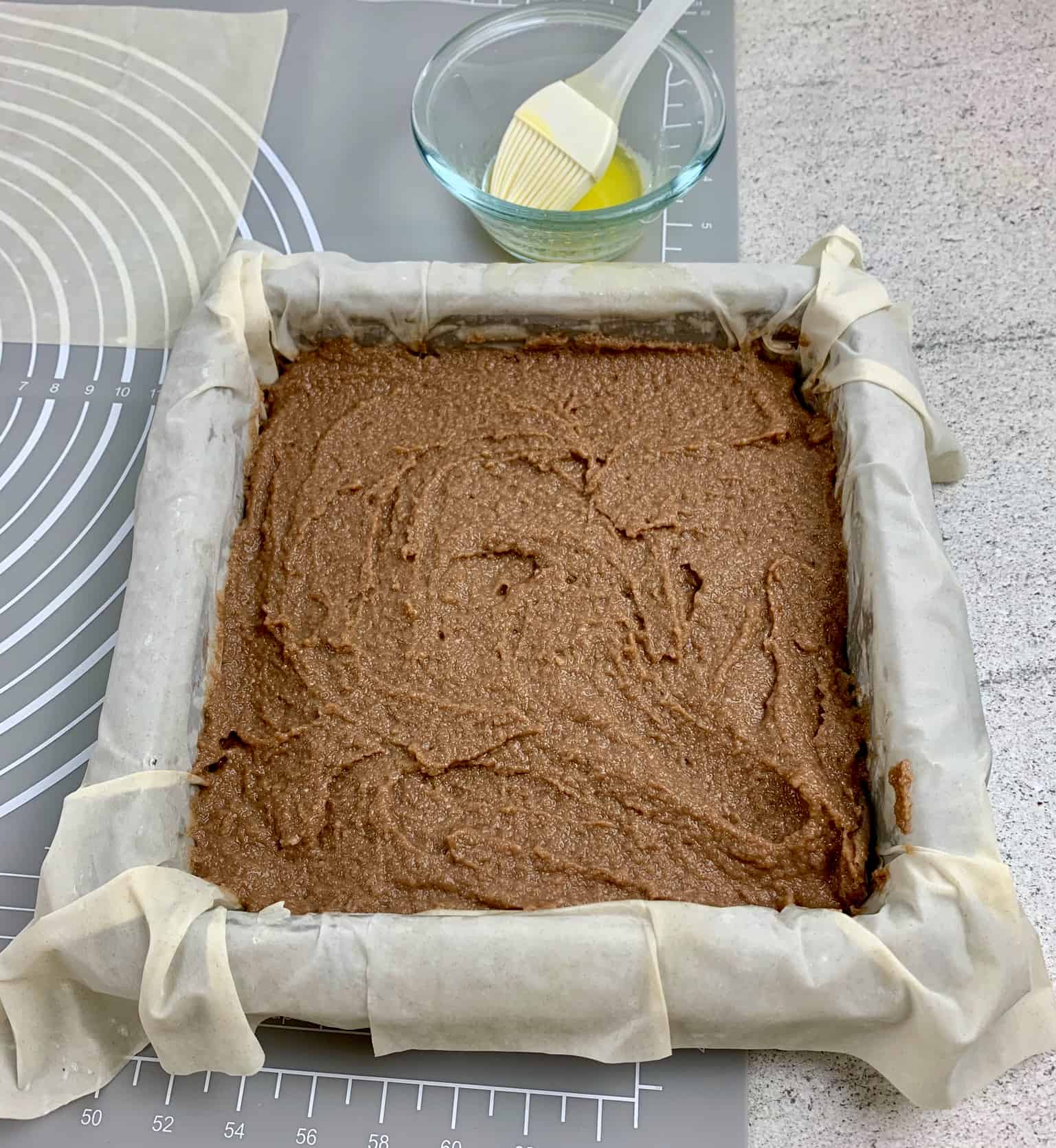 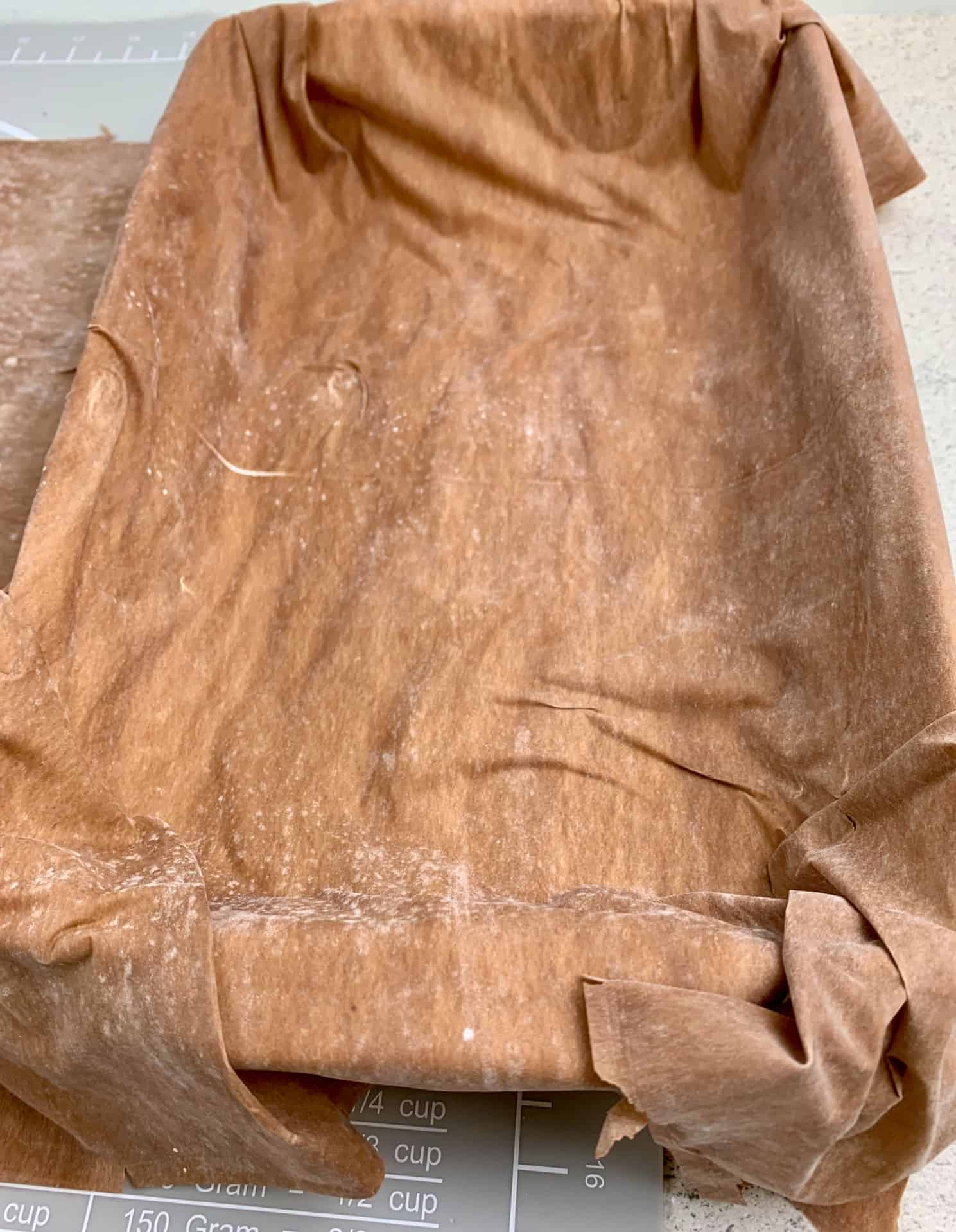 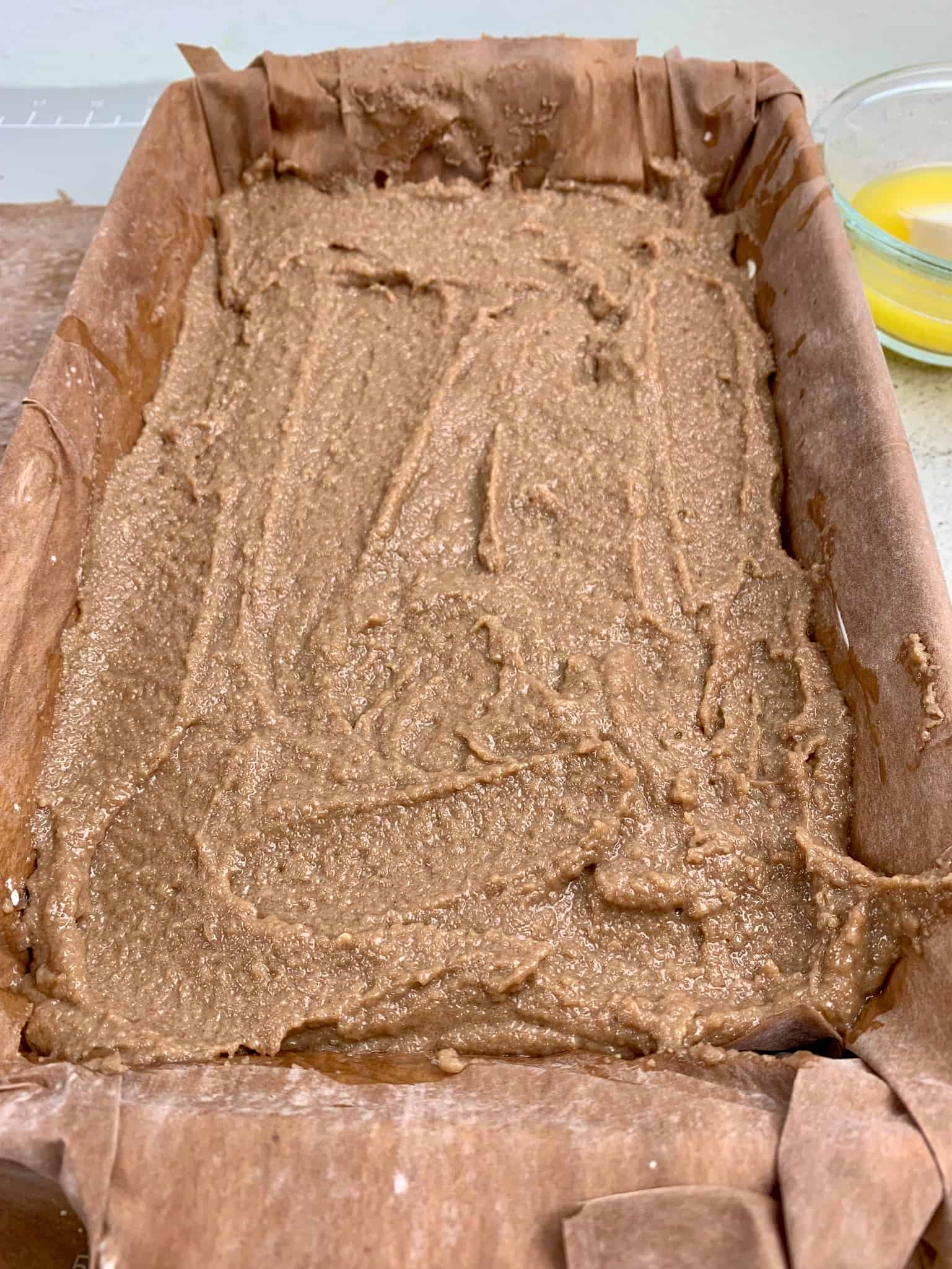 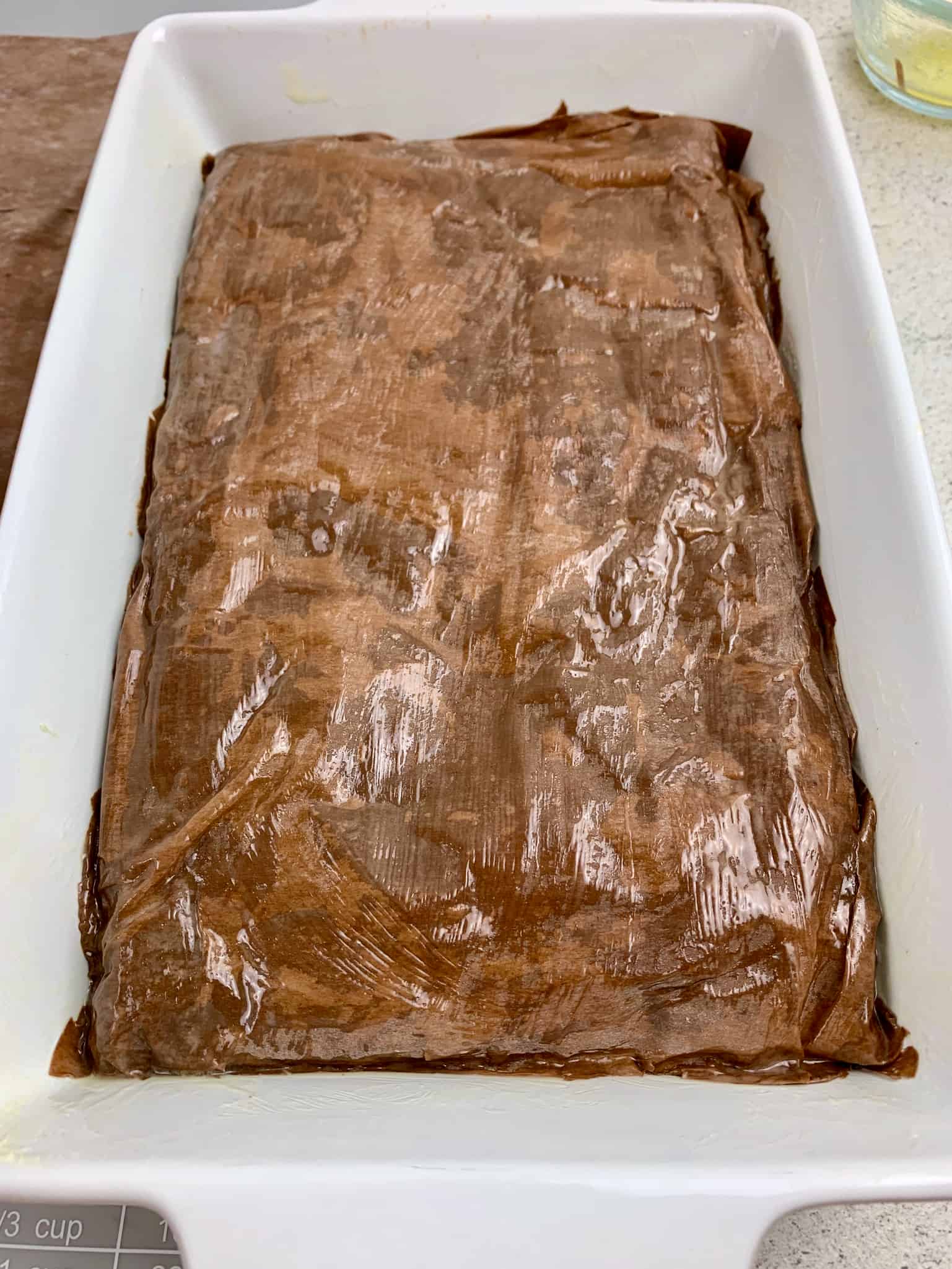 How long can you keep chocolate Galaktoboureko

You can store this chocolate Galaktoboureko in airtight container and refrigerate it for a couple of days.

How do you serve chocolate Galaktoboureko?

This chocolate Galaktoboureko is best served hot. Indulge into crispy phyllo with a creamy and chocolatey semolina custard filling. This delicious chocolate flavoured semolina custard pie is best served hot when the phyllo pastry sheets are crispy and flaky and the custard is creamy and soft. It is equally delicious when served cold too! Also you can pair a slice of chocolate Galaktoboureko with a scoop or two of ice cream! 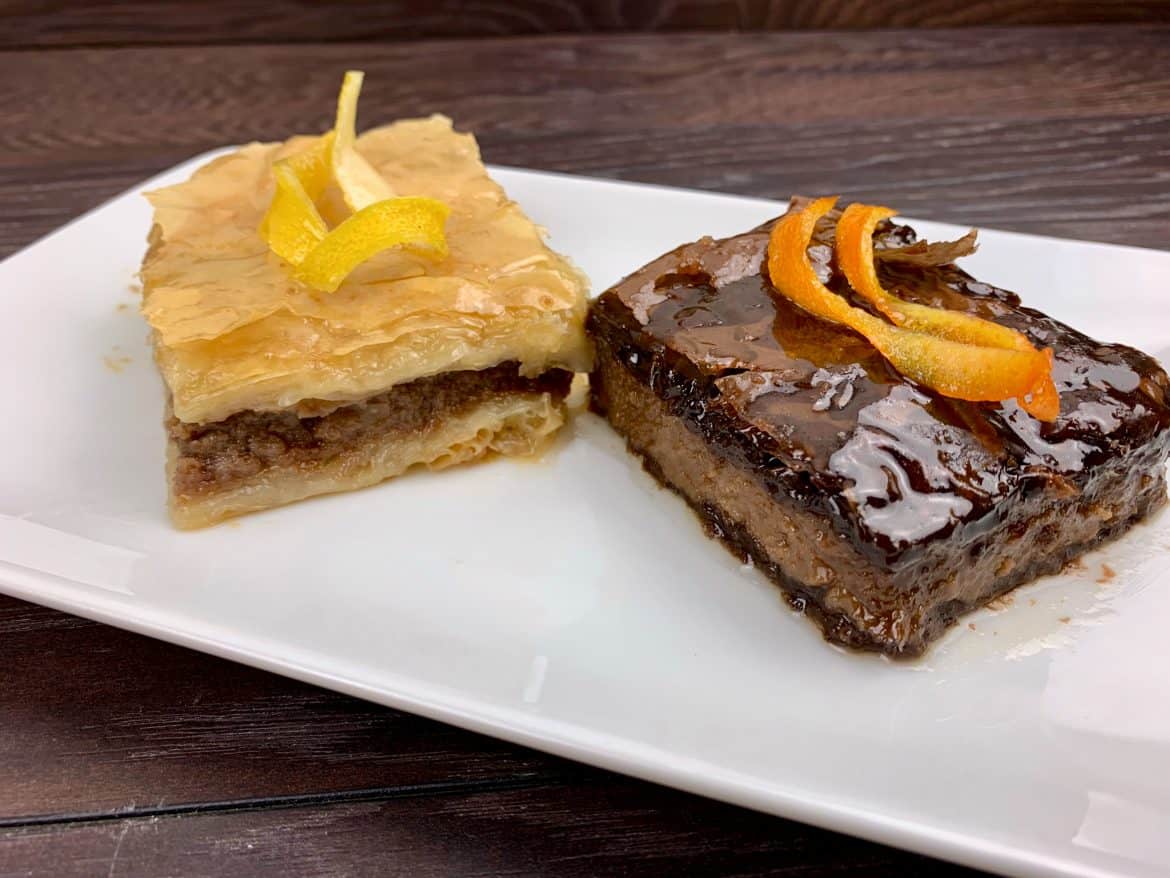 For the semolina custard

For the semolina custard: